Jewish Communities of Romania: Proposal for a Jewish Newspaper

This folder contains two documents written by Bernard Kahana of Brașov in 1941. One is an introductory letter addressed to Fildermann, president of the Federation and with a signed note added (in Romanian) by Șafran, head rabbi at the time. The other is an extensive proposal by Kahana to establish a Jewish newspaper in Romania. It appears that Kahana owned a printing press or ran a newspaper which was shut down and seized in the wake of anti-Semitic laws and he is now proposing to found a paper which would be permitted under the new legal framework. The seven page, closely typed proposal is valuable as it sets out the situation at the time of Jews in Romania, the sudden importance of strong communal institutes, the changes wrought in Jewish consciousness since the start of the war and anti-Semitic legislation, and touches on many aspects of Jewish life, religious, secular, Zionist, etc. Everything is in German, indicating (presumably) Kahana's Transylvanian background and probably that he was not a fluent, or at least confident, Romanian speaker.

The documents until World War II are composed of a variety of items reflecting community life, including statutes, correspondence, reports, and membership lists. Documents from the World War II period generally address the plight of Romanian Jews during this period. This material includes reports on persecutions and expropriations, correspondence and other documents related to deportees, and emigration paperwork. The post-World War II material generally deals with the repatriation of Jewish deportees to the Romanian-organized camps in Transnistria, the welfare of survivors, emigration, and the activities of the Federation of Jewish Communities in Romania and of the Jewish Democratic Committee (communist Jewish organization). For the complete inventory list of the collection, please see this link (in Romanian only).

JBAT archivists surveyed folders containing material related specifically to Bukovina and Transylvania. For details on the contents of these folders, please see the list below and click on any link. 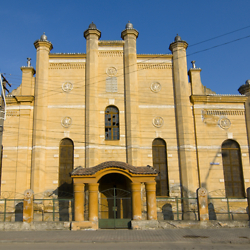 The Medias Jewish Community Collection contains material spanning the life of the community, with documents dating from the late 19th century until the end of the communist era as well as general administrative paperwork into the 1990s (when the community, for all intents and purposes, no longer existed). The bulk of the material is from the mid-20th century (1940s-1970s) and of administrative or financial nature. Several extensive items of particular historic significance have been digitized and are available below in Series III: the 500-page book of meeting minutes covering board member and community meetings from 1930-1947 (Box OS21); hundreds of registration forms created by the Jewish Council (Centrala Evreilor) during the war which recorded an individual's family background up to the grandparents (names, birthplaces and date) (Box OS18 and OS19); the burial registry with details on tombstone location, date (and sometimes cause) of death and accompanying index of names (OS13); and the cemetery map (last item in Series III). The original statutes of the community, in Hungarian from 1894, as well as later German and Romanian versions, are also digitized and can be found in Series V (SD2/folder 2). The material in this collection may be of interest to those researching Jewish life, identity, and culture in southern Transylvania before and during World War II and Jewish life under the Romanian communist government. For additional details on the contents of each series, please see the comprehensive container list below. The collection is arranged by series and chronologically within each series.