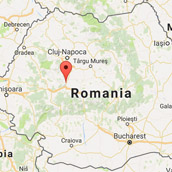 Town in the central western area of Romania, on the Mureş River. Alba Iulia (known in German as Karlsburg; Ladino as Carlisburg; Latin as Alba Carolina [or Apulum in ancient Roman times]; and Hungarian as Gyulafehérvár) served from 1542 to 1690 as the capital of the autonomous principality of Transylvania under Turkish suzerainty. It was then part of Hungary until it was annexed to Romania after World War I.

Jews had a documented presence in Alba Iulia by the end of the sixteenth century. In 1653, the region’s code of laws (the Approbatae Constitutiones) required all Jews in Transylvania to live exclusively in this town. According to the testimony of the Swedish traveler Conrad Iacob Hiltenbrandt (1656), Jews had already established a synagogue there by the middle of the seventeenth century. In the first half of the eighteenth century, Habsburg rule extended earlier privileges, which had been granted by the princes of Transylvania, to allow Jews free trade and a distinct community life.

By the late eighteenth century, Jews had settled in other parts of Transylvania despite the existing legal restrictions. In 1779, Empress Maria Theresa once again ordered all Jews living in Transylvania to be concentrated in Alba Iulia; this plan, however, was put on hold by her son, Emperor Joseph II, who also allowed for the building of a Sephardic synagogue, a project that had been proposed as early as 1774. Construction took more than a century to complete, as the synagogue was not opened until 1886. It functioned until about 1980, when the Communist government demolished it.

The Siebenbuerger Israelit newspaper was published in Alba Iulia in 1883. The artist and sculptor László Keleti worked there after World War I. The surge of antisemitism between the two wars culminated in Alba Iulia with the destruction of the Ashkenazic synagogue in 1938 by members of the Iron Guard. Between 1940 and 1944, the community suffered the severe consequences of anti-Jewish legislation and policies adopted by the Antonescu regime. Some rebuilding of community life after the Holocaust led to an increase in the number of Jews in 1947 to 2,070 persons, but emigration over the following decades brought the Jewish presence in Alba Iulia to symbolic dimensions; in 2003, just 45 Jews remained.