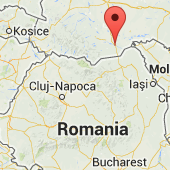 Chernivtsi is a city in southwestern Ukraine, lying on the Prut River. Chernivtsi (Rom., Cernăuți; Ger., Czernowitz; Yid., Tshernovits) is the current capital of the Chernivtsi region. The presence of Jews there was first mentioned in 1408. In the sixteenth and seventeenth centuries, the number of Jewish inhabitants increased significantly. During this period the Jews mainly spoke Yiddish and were active as traders. The kahal (community), led by an elected judge and a rabbi, enjoyed limited autonomy and the right to its own jurisdictions.

In 1774, Austrian authorities, who had now occupied the town, recorded the highest concentration of Jews (468) in the entire district. Seeking to limit immigration from neighboring areas, the authorities resorted to various repressive measures, ranging from compulsory fees to forbidding marriages and even endorsing banishment. Nevertheless, in the following decades the Jewish population continued to grow.

Among the outstanding rabbis who guided the community were Ḥayim Tyrer (ca. 1760–1816/17) and Yitsḥak Horowitz Meisels (1833–1870), an adherent of Hasidism. Economic progress and rapid urbanization of the Jewish community clearly affected its interaction with the surrounding environment. As promoters of incipient capitalism, and given the absence of a local bourgeoisie, the Jews—who were craftsmen, merchants, moneylenders, builders, and real estate owners—identified with modernization trends and promoted German language and culture as a means of attaining social progress and acceptance. Although traditional schools (Talmud Torahs and heders) continued to predominate, Jewish students attended German Jewish public schools that operated from 1789 to 1806, in addition to other educational institutions, including the city’s German high school, which was founded in 1808. An attempt in 1843 to establish a bilingual school that offered German and Hebrew finally succeeded in 1855.

After being designated the capital of the new Habsburg crown province of Bucovina in 1849, Czernowitz enjoyed several decades of development, a process stimulated by the economic and political emancipation of Jews, which was completed after 1867. The Jewish population also increased significantly: from 4,678 (out of a total 20,467) in 1850 to 14,440 (out of 45,600) in 1880 and 28,610 (out of 87,235) in 1910. The proportion of entrepreneurs who were Jewish reached approximately 90 percent after 1900. It was therefore not by chance that parliamentary representatives of the Chamber of Industry and Commerce, founded in 1850, were mainly Jews.

The strengthening of a liberal middle class that inclined toward German language and culture was also reflected in communal life, which was controlled by representatives of the bourgeoisie who after 1850 supported reform and assimilation. These forces elected Eli‘ezer Igel as chief rabbi of Czernowitz; he preached in German and held his post from 1853 to 1892. There were repeated confrontations with the ultra-Orthodox opposition who in 1872 finally elected their own rabbi and thus divided the community. The split ended, however, in 1877 as a result of arbitration by the authorities. A network of institutions (hospitals, asylums, orphanages, schools) and foundations was gradually added to the prayer houses and synagogues, among which the majestic temple established in 1877 reflected the social prestige of the Jewish community of Bucovina.

The particular urban civilization of Czernowitz resulted from the apparent cultural “symbiosis” between Germans and Jews, and represented a bourgeois enclave within a patriarchal and conservative environment. In 1905–1908 and 1913–1914, the city was led by Jewish mayors Eduard Reiss and Salo Weisselberger, respectively. After 1890, the response to the first antisemitic manifestations of the Romanian, Ukrainian, and German nationalists consisted of both the spread of Zionism and the electoral success of the Jewish National Party, led by Benno Straucher, who had been the community’s president since 1903. Diverse cultural initiatives served as alternatives to the choice of assimilation, the most prominent being the world’s first conference dedicated to Yiddish language and culture, held in Czernowitz in 1908 [see Czernowitz Conference].

The threat posed by Russian armies, which occupied the town three times during World War I, led many Jews to flee. Some did not return after the city was occupied by Romanian forces following an attempt in November 1918 by Ukrainians from Galicia to take control. The unification of Bucovina with Romania was then proclaimed, with the region under the control of the Romanian army. Subsequently, a significant number of Jews from Ukraine, Poland, and Bessarabia settled in Cernăuți; the 1930 census indicated that 42,592 Jews resided there (representing 37% of the total population). In spite of the Romanian nationalists’ hostility, the significant positions Jews held in the town’s economic and social life enabled them to play important roles within the municipal council, where some served as vice mayors; in associations of independent professionals; and in the Chamber of Industry and Commerce.

In 1930, the majority of the Jewish population of Cernăuți declared Yiddish as their mother tongue. The disputes within the community between Yiddishists and Hebraists—as well as among Zionists, social democrats, and supporters of the Union of Romanian Jews—weakened the ability of the community to react to increasingly virulent antisemitic manifestations, events that occasionally had the passive or even active support of the authorities.

For the Jewish population, the occupation of Cernăuți by the Soviet army in June 1940 replaced racial persecution with the terrible experience of Communist social egalitarianism and Stalinist terror. The bourgeois elite of the community, numbering approximately 3,000 people, was deported to Siberia. Romanian and German forces reoccupied the city on 5 July 1941, with precise orders from the Antonescu government to punish Jews for their apparent attachment to the Soviet Union. Following a wave of assassinations, culminating in the murder of the chief rabbi, Abraham Mark, and the torching of the temple, a series of repressive measures was instituted, depriving Jews of civil and economic rights.

On 11 October 1941, a ghetto was established that concentrated approximately 5,000 people in the former Jewish district of the city, serving as a transit point before their deportation across the Dniester River. From October 1941 to May–June 1942, more than 32,000 people were deported to various camps and ghettos in Transnistria. To prevent a complete paralysis of local affairs, several Romanian notables, led by Mayor Traian Popovici, managed to obtain approval for 17,000 Jews to remain in Cernăuți, where they were to perform compulsory labor. It is estimated that after the city was reoccupied by the Soviet army in 1944, approximately 30 percent of the Jewish population had survived.

Between 1945 and 1946, most of the surviving Jews crossed the border to Romania and then immigrated to Palestine. Over the following decades, Jews from Chernivtsi, many of whom had come from other regions of the USSR, lived through the various stages of Soviet policy toward Jews, ranging from Stalinist repression to the latent antisemitism of the 1970s and 1980s. Immigration to Israel, which continued sporadically during the Soviet period, became more intense when Ukraine acquired its sovereignty in 1991. Whereas in 1959 there were approximately 37,000 Jews living in Chernivtsi, in 1989 the number had dropped to 16,469; the latest census figures indicate that only 1,443 Jews remained in the city in 2001. There is only one functioning synagogue. Communal life was reorganized around the Yiddish cultural society named for Eliezer Shteynbarg, led by the writer Josef Burg.