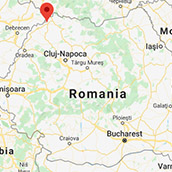 (Hun., Szatmárnémeti; Yid., Satmar; also Satmer), a small town in northwestern Romania. Satu Mare was part of Hungary until World War I and again between 1940 and 1944. Jews first appeared there toward the early eighteenth century: they distilled brandy and leased taverns on crown estates. In 1715, however, when Satu Mare became a royal town, their influx came to a halt and Jews who had arrived earlier were expelled. Allowed to come into town just for fairs, Jews did not begin to resettle until the 1820s. Jewish arrivals accelerated in the 1850s: by 1869 the Jewish population had grown to 1,357; by 1890 to 3,427; and by 1910 to 7,194 (representing 7.4%, 16.5%, and 20.6% of the total population, respectively). By 1941, there were 12,960 Jews in Satu Mare—24.9 percent of the total number of residents.

Jews who had moved into Satu Mare from surrounding rural villages comprised the petty bourgeois until the late 1860s. Later, more affluent Jews played a significant role in the development of the food industry, especially in distilling. Their market was much smaller, though, than that of Miskolc or Nagyvárad, and thus Satu Mare became a commercial center only for its own county. Some of the highest taxpayers in the nineteenth and twentieth centuries were the owners of Markovits Elek & Sons Distillery, as well as the grain and alcohol merchants Adolf Rosenfeld, Sándor Schwarcz, and Ezékiel Freund.

A great influx of immigrants in the 1870s shattered the unity of the Jewish community. Initially the newcomers were traditional Ashkenazic Jews, but later Hasidim became the majority and thus slowed down the process of acculturation. In 1897, after the death of chief rabbi Benjamin Farkas Mandelbaum, who had founded the community and held it together since 1849, the community split up. Juda Grünwald, a supporter of the Hasidic movement, was elected chief rabbi. As a result, the opposition split off from the Orthodox community and founded a Status Quo (neither Orthodox nor Neolog) community. In 1903, Sándor Jordán became the leader of the latter community. He founded a society for the renewal of the Hebrew language, as well as opened the first Hebrew-language kindergarten in 1911. From 1866, the Orthodox community ran an elementary school; later, they founded a yeshiva, a women’s society, and a bikur ḥolim (caring for the ill) society. In 1927, the Orthodox built a hospital. The Status Quo community’s synagogue was built in 1904; they later established an elementary school and a vocational school. In the 1920s, the town had two Jewish elementary schools and an apprentice school.

In 1920, Eliezer Dávid Grünwald became Satu Mare’s chief rabbi, and thus strengthened the original Ashkenazic movement. His yeshiva was attended by 400 students and was one of the largest in the region. In the 1920s, there were several Zionist organizations in Satu Mare (Mizraḥi was especially strong) as well as a B’nai B’rith Concordia Lodge. In 1928, however, Rebbe Yo’el Teitelbaum, an ardent traditionalist and anti-Zionist, took over the position of chief rabbi, ensuring that the influence of Hasidism would increased again. Between 1920 and 1936, Aharon Roth, another well-known Hasidic rebbe, was active in the city; he was the founder of the Toldot Aharon community in Jerusalem.

Satu Mare was reannexed to Hungary in 1940. Laws drastically restricting the economic activities and civil rights of Jews were implemented by the new administrative authorities. On 26 April 1944, a ghetto was set up in a section of the town bordered by Zrínyi, Petőfi, and Báthory streets. About 18,000 Jews were forced into this area from Szatmárnémeti and its surrounding villages. They were transported to Auschwitz between 19 May and 1 June.

After the war, only a handful of surviving Jews returned to Satu Mare, which was once again part of Romania, but their numbers had grown to 7,500 by 1947. Included were Jews who had moved there from different parts of Romania. Jewish communities were reorganized, but the linguistically and culturally diverse group could not integrate itself into a coherent community. The upsurge of Zionism led to immigration to Israel; by 1970 the town’s Jewish population numbered 500 and by 2002 only 38 Jews remained.

Translated from Hungarian by Veronika Szabó

The YIVO Encyclopedia of
Jews in Eastern Europe
This is an ongoing project. Please check back for updates and additions to the catalogue.