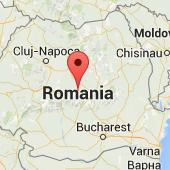 Town in central Romania, in the Făgăraş Depression on the Olt River, and northwest of Braşov. The first documented reference to Făgăraş (Ger., Fogarasch; Hun., Fogaras) dates to 1291; in the second half of the seventeenth century it was the seat of the Transylvanian legislative assembly. At the end of the same century (1694–1700), the first factory in Transylvania was established near Făgăraş (the glassworks in Porumbacul de Sus), and was leased to the Jews Iacob Fincz, Abraham Veider, Abraham Naphtali, and Solomon.

The Jewish community in Făgăraş was established in 1820, and a burial society and cemetery were founded in 1827. A synagogue was built in 1829, and an elementary school functioned with two teachers in 1840. The official census of 1836 recorded 27 Jewish heads of families with 8 houses of their own; among them were 12 liquor producers, 9 merchants, 2 peddlers, a craftsman, a religious functionary, a teacher, and one person listed without an occupation. In response to pressure from the municipality, the administration of the province of Transylvania ordered the synagogue to be closed down in 1836; it was demolished after the expiration of a three-day deadline given to the Jewish community to comply with the order.

Jewish life was vibrant in the nineteenth and first half of the twentienth centuries. The synagogue was rebuilt in 1858, and the first rabbi of the community, Löbl Silbermann, wrote a chronicle of community life between 1855 and 1863. His successor, Josef Cohné (1864–1874), expanded the community school to five classes with two teachers and a modern curriculum. The rabbis Sándor Jordán (1890–1903), Adolf Kelemen (1904–1916), and Abraham Isac Nebel (1924) were supporters of Zionism. Kelemen visited Jerusalem in 1905 and published a memoir of his journey. János Rónai, the founder of the Zionist movement in Transylvania, had his legal practice in this town. One of the teachers in Făgăraş was Aron Dornzweig; born in Lemberg, he was one of the first poets living in Transylvania to write in Hebrew (one of his three books of poetry was published in Sibiu in 1873).

After the civil emancipation (1867) and the schism in the Congress of Jews from Hungary and Transylvania (1868–1869), the community of Făgăraş became Neolog. Later, in 1926, the community switched to an Orthodox orientation. In the interwar period, a women’s association as well as other charity organizations were active.

During the Holocaust period, Jewish properties in Făgăraş were confiscated, and Jews from the surrounding rural area were concentrated in the town. Jews were forced into hard labor, and numerous high tax obligations were imposed on them. After 1945, the community was reorganized and experienced a temporary increase in number; there were 360 members in 1947. As a result of emigration, only 20 Jews still lived in Făgăraş in 1970; by 2003, just 3 Jews remained; they are counted in the community of Braşov.