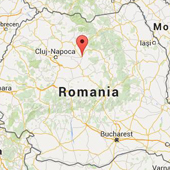 Town in eastern Transylvania, at the confluence of the Mureş and Gurghiu Rivers, 32 km north-northeast of the city of Târgu Mureş. The first reference to Reghin (Ger., Sächsisch-Reen; Lat., Regun; Hun., Szászrégen) dates to 1228. In the second half of the nineteenth century, it experienced substantial economic development and was designated as a free royal town in 1863.

Jews were not welcome in Reghin; not until the early 1800s did records note a Jewish presence (at that point, a Jewish cloth dyer was allowed to live there). A lifting of restrictions in 1851 led to the establishment of the first community of Jewish immigrants; they arrived from Bucovina and Galicia, and brought with them a strong Hasidic influence. The 39 Jewish families living in Reghin in 1852 rented a prayer house, and then in 1866, when they numbered 282, founded a synagogue. In 1891 the number of Jews was recorded as 394 (7% of the total town population). The census of 1930 noted 1,587 Jews (16%), and the census of 1941 showed 1,653 (10%).

After civil emancipation (1867) and following the General Jewish Congress of Hungary (1868–1869), the community of Reghin chose to become Orthodox. Its first rabbi, Hillel Pollák, was close in orientation to his colleague Hillel Lichtenstein of Marghita and Cluj, representing the ultratraditionalist trend. Pollák was succeeded by Moses David Sofer, and between 1907–1944 by József Freund, who had studied in Frankfurt. An elementary school was set up in 1874 and continued to function, after reorganization in 1910, until the summer of 1944. In 1885, Reghin became the administrative center of the rural Jewish communities from the neighboring area. In 1940, it was transferred from Romania to Hungary, as were other parts of Transylvania.

By April 1944, the Jewish community of Reghin included 1,682 members. Its president was the tradesman Emil Franck, and its chief rabbi was József Freund; other town rabbis were Gyula Freund and Daniel Fixel. The community employed 16 people and supported an elementary school, a burial society, and an association that cared for impoverished children.

In May 1944, Hungary was occupied by German troops. One of the 13 central ghettos of northern Transylvania was set up in Reghin; 3,149 Jews were concentrated there and were then deported to Auschwitz on 4 June of that year. After 1945, the community was rebuilt by 820 Jews who had survived, but over the following decades the number of Jews in Reghin declined as a result of emigration. By 1971, there were no more than 25 families, and by the start of the twenty-first century not more than 10 Jews still lived in Reghin; they are included today in the community of Târgu Mureş.