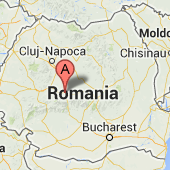 Sibiu is a city in central Romania, on the Cibin River. The records of a legal dispute in villages near Sibiu (Ger., Hermannstadt; Lat., Cibinium; Hun., Nagyszeben) in 1357 include the earliest reference to a Jew in Transylvania: Petrus Judaeus. In 1492, the king of Hungary, Vladislav II, ordered the judge of Sibiu to arbitrate legal disputes between Jews and Christians. In 1586, mention was also made of a Jewish organist by the name of Pantalone.

In the sixteenth and seventeenth centuries, Jews in Sibiumaintained commercial links with the Ottoman Empire and Poland. In the eighteenth century and the first half of the nineteenth, the restrictive policy of the reeve of Sibiu prevented Jews from settling there. However, during the Diet (legislative assembly) of 1837–1838, it was in Sibiu that the first petition for the civil emancipation of Jews, drafted by the chief rabbi of Transylvania, Yeḥezkel Paneth, was submitted to the legislative body of the principality. Nonetheless, the city authorities, supported by the Saxon press in Sibiu, attempted to maintain restrictions on the settlement of Jews even after 1850. An imperial resolution in 1851 then granted access for Jews to all cities.

In 1873, the first book in Hebrew in Transylvania was printed in Sibiu; it was a collection of poems by Aron Dornzweig, titled Nevel ve-kinor (Harp and Violin). A Jewish school was opened in 1919, and in 1923 a Hasidic community was established under the leadership of Rabbi Tsevi Hirsch Kinstlicher (1919–1949). From 1940 to 1944, Sibiu remained under Romanian jurisdiction. The Antonescu regime passed anti-Jewish legislation and allowed the seizure of community property, drafted Jewish men for forced labor, and excluded Jews from participating in social and public life. Plans to deport Jews during World War II were, however, not carried out. The community of Sibiu was reorganized after 1945, and reached 2,020 members in 1947. As a result of immigration to Israel, though, most Jews left Romania over the following decades, and in 1971 there were only 125 Jews left in Sibiu. By the early twenty-first century the community had fewer than 50 members.