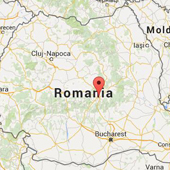 Braşov is a city in central Romania, in the Bîrsei Depression at the foot of the Tîmpa Massif. Braşov has been variously called Kronstadt (Ger.), Corona (Lat.), and Brassó (Hun.); from 1950 to 1960 its official name was Stalin City. The first references to the town’s Jewish population date from the fifteenth century. In the 1500s, Jewish traders supplied guilds in Braşov with wool and dyes from the Ottoman Empire. Once Jewish residence was restricted to the city of Alba Iulia in the 1600s, there was no further mention of a Jewish presence in Braşov until a plague in Walachia in 1811 compelled several Jewish families to take refuge in this city.

The Jewish population of Braşov increased with waves of immigration from the region south of the Carpathian Mountains in 1821 and in 1828–1829, when Walachia was devastated by war and epidemics. In 1826, 11 Jewish families (46 people), obtained permission to establish a community with its own statutes and an elected leadership. It was led by Aron Löbl, who wrote a history of Braşov’s Jews covering the period from 1807 to 1830. In the decades that followed, town authorities and the societies of Saxon, Greek, and Romanian traders in the town attempted to expel Jews, but the imperial court in Vienna rejected these proposals because Jewish trade enabled Austrian exports to flow to the Ottoman Empire. It was only after the civil emancipation of 1867 that such demands disappeared.

By the late 1920s, the Jewish community of Braşov included entrepreneurs (4), merchants (2), salesmen (226), clerks (119), physicians (14), engineers (10), lawyers (8), independent professionals (4), teachers (2), and an artist. One of the first poets from Transylvania to write in Hebrew, Shelomoh Ehrenkranz, lived there as well. During the interwar period, the journal Brassói Lapok, which was owned and edited by Jews, was published, and in 1939–1940 the Monitorul Comunității (a publication of the Neolog community) was also produced. From 1940 to 1944, when Jewish students were excluded from public schools, a Jewish school was opened and included four grades. After the Holocaust, the community was reorganized; by 1956 it had 1,759 members. As a result of postwar emigration, however, the community numbered just 270 members in 2003.