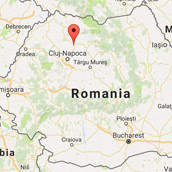 Salt-mining town in northwestern Romania, on the Someş River 60 km northeast of Cluj. The first documented reference to Dej (Ger, Desch; Hun., Dés) dates to 1061. After legislation in 1693–1700 had prohibited Jews from settling in mining towns, authorities in Dej decided in 1722 to forbid Jewish residence. No Jews lived there until 1834; and just three were mentioned in 1838.

Dej’s Jewish elementary school opened in 1891 and functioned until 1944. Its first  was established in 1862, and by 1940 there were 5 such institutions in the town, to which 14 heders and a Talmud Torah (1923) had also been added. After the schism of the Jewish Congress of Hungaryand Transylvania (1868–1869), the community of Dej chose to be Orthodox. A women’s association was formed in 1889. After World War I, the Zionist movement was strongly supported by youth organizations and numerous periodicals.

After 1940, Dej was part of the northern Transylvania region transferred from Romania to Hungary. In May 1944, when Hungary was occupied by German troops, Jews of Dej were confined in ghettosand then deported to Auschwitz. In the forest of Bungur, near Dej, one of the 13 central ghettos of northern Transylvania was established, whence 7,674 Jews were deported on 28 May and 6–8 June 1944. The 239 Jews who survived reorganized the community in 1946, and in the following year the Jewish population had grown to approximately 1,000 members. As a consequence of emigration, there were only some 30 Jews living in Dej in 2003.