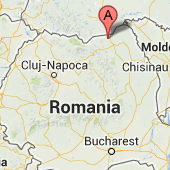 Rădăuți is a town in northeastern Romania, in the region of southern Bucovina and the present county of Suceava. Jews first settled in Rădăuți (Ger., Radautz), at the end of the eighteenth century, along with German colonists from Bohemia who had been invited to Bucovina by the Austrian regime established after 1774. Whereas in 1807 there had been only three Jewish tax-paying families, in 1880 there were 3,452 Jews living in Rădăuți out of a total of 11,162 inhabitants. The Jewish population swelled to almost 7,000 people by 1914, mainly as a result of emigration from Galicia and Ukraine.

Jews in Rădăuți worked in trade, banking, and small industrial enterprises (including forestry, the paper industry, breweries and distilleries, and leather). Well represented in the town’s administration—which was headed by Mayor Leo Brunstein from 1901 to 1907—the local Jewish bourgeoisie followed the model of its counterpart in Cernăuți in terms of its preference for German culture. At the secondary school in Rădăuți, which opened in 1872, Jews accounted for 25.5 percent of the students in 1888 and for 55 percent in 1905. In 1859, the Jewish community in Rădăuți, whose first synagogue had been erected in 1830, became independent of the community of Siret; 30 years later there were eight synagogues and a temple.

A significant number of Jewish inhabitants were Hasidim, adherents either of Boyan or Sadagora; in 1894, the Hasidim even briefly chose their own rabbi, rejecting the one elected by the majority of the community. The first Zionist organization was set up in 1900, and in 1907 a school with instruction in Hebrew opened for both children and adults; it functioned until 1938. In 1911, Salomon Rudich, an industrial entrepreneur from Rădăuți, was elected deputy to the Landtag of Bucovina on the lists of the Jewish National Party.

After 1918, when Bucovina was annexed to Romania, the number of Jews living in Rădăuți remained unchanged. In 1930, there were 5,647 Jews out of a total population of 16,788. Despite political disputes over the leadership of the community—especially between Zionists and socialists—an elaborate system of social institutions developed in Rădăuți; between 1919 and 1926 there was even a private Jewish high school. Owing to the presence of rabbis such as Jakob Hoffmann and Iacob Nacht, Rădăuți also became an outstanding Jewish religious center.

The rebellion of the Iron Guard against General Ion Antonescu in January 1941 led to an anti-Jewish massacre in Rădăuți. Pursuant to the order of the government, on 9 October 1941 the Jews from Rădăuți began to be deported to Transnistria. With the exception of 64 people, who were kept in town, the rest of the Jewish population was displaced, at the cost of countless lives, to the camps and ghettos ofMogilev, Djurin, Odobowka, Bershad, and Balta, among others.

In addition to survivors, who returned to Rădăuți in March 1944, refugees from northern Bucovina also settled in the town; in 1947, approximately 6,000 Jews were living there. However, massive immigration continually eroded this number: whereas in 1962 there had been approximately 800 Jews, in 2003 there were only 62.