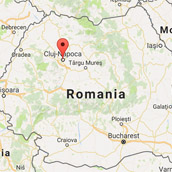 City in Romania, traditionally considered to be the capital of Transylvania. The Jewish presence in Cluj (Ger., Klausenburg; Hun., Kolozsvár; current official name, Cluj-Napoca) was first noted in a document dating from 1481 that referred to a conflict between Jews from Cluj and the powerful Haller family of Buda. One century later, in 1578, a Jewish presence at the Cluj fair was considered alarming by the authorities. In the seventeenth and eighteenth centuries, Jews were allowed to settle in just one town of Transylvania (Alba Iulia); hence, only during the age of Emperor Joseph’s II reforms (1780–1790) were there again indications of Jews in Cluj.

The first Jew permitted to live in Cluj was the tradesman Löbel Deutsch. In the reactionary trend that followed the withdrawal of Joseph’s reforms in 1790, city authorities decided to close down Deutsch’s shop. When Deutsch complained to the administration of the province of Transylvania, his 11-year-old daughter was kidnapped and forcibly baptized; this case generated an important conflict involving the Court of Vienna and Emperor Francis II. Despite repeated expulsion measures, Jews continued to live in Cluj in small numbers during the first half of the nineteenth century.

On the eve of the 1848 revolution, a census recorded 58 Jewish families in Cluj, of which the local authorities intended to have 16 banished. The community was denied the right to a synagogue, school, and cemetery. When the revolution broke out, the city’s authorities ordered all Jews to be banished within one year; violent confrontations were meant to speed up this process. However, the intervention of the revolutionary Hungarian government in Pest prevented the implementation of this policy. When the revolution failed, the new Imperial Constitution of 1849 gave Jews in Transylvania, for the first time, freedom to settle in the cities and to acquire real estate.

The number of Jews in Cluj increased in 1850–1851 to 479 people; the first synagogue was established in 1851; and in 1852 the community elected its first rabbi, Hillel Lichtenstein, who came from Marghita and was a student of Mosheh Sofer of Pressburg. Lichtenstein’s traditionalist views (he closed down the modern school that had been set up in 1843) and his conflict with the chief rabbi of Transylvania, Avraham Friedmann, led to his dismissal and banishment from Cluj in 1854. The community elected Feisch Fischman as its new rabbi in 1861, followed by Avraham Glasner in 1867. The latter’s son, Mosheh Glasner, appointed in 1878, was a religious Zionist whose son, Akiva Glasner, succeeded him in 1919 and remained rabbi until the destruction of the community in 1944, when the town’s Jews were deported to Auschwitz.

The rabbis of the Glasner family led the Orthodox community, a group that was formed as a result of the division that took place after the General Jewish Congress of Hungary of 1868–1869. Those who refused to accept the Orthodox orientation were organized in 1881 into a Status Quo community (neither Orthodox nor Neolog), which became Neolog in 1884, and which established its own synagogue in 1886. The Neolog synagogue was renovated in 1912, but was desecrated by members of the Legionary movement in 1927, bombed in 1944, and rebuilt in 1949. As of the early twenty-first century, it still functions as the synagogue of the Cluj community, under the name Sinagoga Martirilor (Synagogue of the Martyrs).

The Neolog community was led by chief rabbis Alexander Kohut (1884–1885; later rabbi in New York and professor at the Jewish Theological Seminary), Mathias Eisler (1891–1930; prominent historian of Jews in Transylvania); Moses Weinberger (1934–1944; later, professor at YeshivaUniversity in New York, and author of essential books on the history and culture of Transylvanian Jews). A Hasidic community was established in Cluj in 1921 and it existed until 1944 under the leadership of Rabbi Zalman Leib Halberstam (1904–1944).

Jewish educational programs in Cluj were developed after the civil emancipation of 1867. The Orthodox community opened an elementary school in 1875, and the Neolog community set up a similar institution in 1903; the first school for girls was founded in 1908. After World War I, when Transylvania became part of Romania, a secondary school for boys and girls was founded on the initiative of the Tarbut School Organization in 1920, with instruction in Hungarian, Romanian, and Hebrew; however, authorities closed it down in 1927.

More than 110 Jewish companies contributed to Cluj’s achievements in industry, crafts, trade, banking, insurance, transport, and services. Until 1940, the Jewish press in Cluj published almost 20 periodicals on a variety of religious and secular topics in Hungarian, German, Yiddish, and Hebrew, as well as community newsletters, Zionist publications, and materials for youth. The most prestigious of these publications was the daily Új Kelet (1918–1940). The rich output of literary work in Hebrew, Yiddish, and Hungarian reflected an outstanding group of Jewish writers and poets from Cluj (Benő Karácsony, János Giszkalai, Ernő Salamon, Otto Indig, and others). The Goldmark Jewish Symphonic Orchestra (founded in 1934), the creative work of Jewish composers (including Max Eisikovits, Alexander Boskovits, Hary Maiorovici, and Ervin Junger), and the work of artists and sculptors from Cluj enabled Jews to have an outstanding position in the cultural life of the city.

Persecutions, restrictions, and the bans of the Holocaust brought an end to the flourishing age of Jewish life in Cluj. The confinement in ghettos of 16,148 Jews from Cluj and their deportation to Auschwitz from 25 May to 9 June 1944 marked the end of the vibrant community. Though elementary and secondary schools were reopened after the war, and though a Jewish vocational school was established for survivors of the Holocaust, these institutions were then closed due to the Communist reform of the education system in 1948. Disappointed with the realities of the Communist regime established after World War II, most Jews from Cluj emigrated to Israel, with the community consisting of just 340 families in 1970 (approximately 1,000 people); by the turn of the twenty-first century, only about 500 members remained.