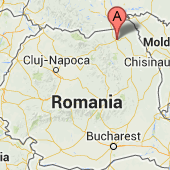 Suceava is a town in southern Bucovina. Scant documentation from the fifteenth and sixteenth centuries indicates that Suceava (known also as Suczawa in Polish or by its Yiddish name, Shots) had a presence of Jewish merchants, doctors, and diplomats from Poland and Turkey. In 1707, Jews were granted permission to live in the town. When Bucovina was annexed to the Habsburg Empire in 1774, the Jewish population of Suceava was 203.

In 1782 the Jewish community of Suceava was granted jurisdiction over smaller Jewish populations in the neighboring towns of Siret and Câmpulung, an arrangement that was maintained until 1850. The first Jewish elementary school, with instruction in German, was founded in 1790. A Hasidic court was founded by Rabbi Yo’el Moskowicz (1810–1886), the son-in-law of Rabbi Me’ir of Premishlan (Peremysh’lany) and another Hasidic court was founded by Rabbi Mosheh Hager (known as the “Humorer Rebbe,” 1863–1927). A large modern synagogue was erected at the beginning of the nineteenth century. By the last decade of that century, many Jews spoke German and worked as lawyers, doctors, engineers, civil servants, bankers, construction entrepreneurs, and land leasers.

Jews were also active in municipal life. The lawyer Baruch Schaffer, leader of the Social Democrat Party, was a vice mayor (1907–1908). This position was held after World War I by another lawyer, Wolf (Walter) Rohrlich-Horowitz. In 1929, Me’ir Teich, the president of the community, became vice mayor as well. A Zionist organization was established at the end of the nineteenth century. In 1902, the first congress of Zionist organizations in Bucovina was convened in Suceava.

Many Jews left Suceava after World War I, though the process of their integration continued after Bucovina was annexed to Romania again in 1918. In 1930, the town had 3,496 Jewish inhabitants (34.2% of its population) and the total county was home to 6,697 Jews. Various organizations, parties, and Zionist youth movements were active, including Agudas Yisroel, the Bund, and the Union of Romanian Jews. In 1928, Zionist committee members were elected to lead the community (made up of 21 people). In 1922, the Union of Jewish Communities of Bucovina had been set up in Suceava. In 1929, the town was host to a conference of Jewish communities from Bucovina, at which new statutes were adopted.

In addition to the newly founded Jewish elementary schools for boys and girls (which used Romanian as the language of instruction), Suceava had a Jewish secondary school, a heder for boys that also taught secular subjects, and a school for girls from the Beys Yankev network. By 1939, there were 12 synagogues functioning. Outstanding Jewish personalities born in Suceava included Me’ir Shapira, leader of the Agudas Yisroel Party in Poland, and the painter Arnold Dagani.

In 1944, when the surviving deportees returned, the number of Jews of Suceava reached approximately 4,000, as many Jews from northern Bucovina chose to settle in the Romanian part of the province. The community was reestablished, and during the first years of the Communist regime, its leadership was assumed by the Jewish Democrat Committee. Jewish schools were nationalized in 1948; however, the teaching of Yiddish was maintained in a few of them. Later the community organized courses in Hebrew. The number of Jews ultimately decreased as a result of emigration. In 1971 the town had approximately 500 Jewish inhabitants. In 2003, there were only 94 left and just one synagogue was still functioning.