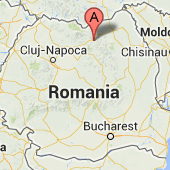 Vatra Dornei is a town in northeastern Romania, in the region of southern Bucovina and the present county of Suceava. Traversed by one of the important trade routes linking Moldova to Transylvania, Vatra Dornei was for a long time administratively dependent on the town of Câmpulung Moldovenesc. The Jews’ early presence in the area was primarily linked to the establishment of the first sawmills, marking the beginning of the forestry industry. It was only during the second half of the nineteenth century that Vatra Dornei acquired greater importance with the discovery of natural resources for creating spa facilities and the growing realization of the tourism potential in the area. Jewish entrepreneurs were involved in the exploitation of these resources from the outset.

The 1880 census listed 494 Jews out of a total of 3,980 inhabitants; 30 years later, the census listed 1,925 Jews out of 15,529 residents. Jews invested in hotels, restaurants, cafes, and the town’s casino. The supplemental economic and social infrastructure that served tourists—from craftsmen, tradesmen, and bankers to physicians specializing in treatable diseases—consisted mainly of Jews. The tourists, themselves mostly Jewish, came primarily from Bucovina and Galicia, but also from Romania and Russia.

Identifying almost exclusively with the local bourgeoisie and educated in the German culture, many Jews from Vatra Dornei were involved in the town’s administration as public or communal civil servants. From an institutional perspective, Vatra Dornei achieved autonomy from Câmpulung in 1896. In addition to the few existing prayer houses, a synagogue was built early in the twentieth century. Hasidism exerted a significant influence on Vatra Dornei chiefly thanks to the followers of the rabbi of Vijnița (Yid., Vizhnits).

After World War I, tourism (the main source of income for the Jewish population) experienced an increase due to the town’s location on the railway network. In 1930, there were 1,727 Jews living in Vatra Dornei out of a total of 7,759 inhabitants. Zionist organizations, which had been active in the area since the end of the nineteenth century, became more numerous in the 1920s and 1930s, partially as a reaction to the growing nationalist and antisemitic trends in Romania. The Jewish population briefly rose to 2,029 in the summer and autumn of 1940 when Jews left northern Bucovina (which had been transferred to the USSR) and sought refuge in the town. Others arrived as refugees from neighboring villages after having been banished when the Iron Guard came to power.

Already deprived of its civil rights and subjected to economic repression, the entire Jewish population of Vatra Dornei, with the exception of 21 persons, was deported to camps and ghettos in Transnistria in October 1941. More than half of the deportees did not survive. The Jewish community in Vatra Dornei, which still numbered 1,500 people in 1947, dwindled during the following decades as a consequence of massive emigration. In 2003, just nine Jews still lived in this town.