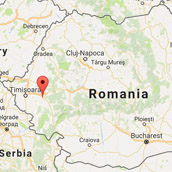 Town in southwestern Romania, on the Timiş River, 60 km east of Timişoara. The first documentary reference to Lugoj (Ger., Lugosch; Hun., Lugos) dates to 1334. From 1658 to 1688, Lugoj was under Turkish rule. The presence of Jews in the town was first recorded in the late seventeenth century.

In 1733, 46 Jews lived in Lugos; they established their first prayer house in Aron Deutsch’s home. During the Austrian–Turkish war of 1736–1739, the prayer site was looted by belligerents. Another prayer house was then set up in the home of Isac Porldeutsch. The town’s burial society was established in 1790, and one year later the community sought official permission to build a synagogue. It was completed in 1793, destroyed in a fire in 1842, but rebuilt the following year; later on, it acquired an organ. In 1781, the Jews of Lugoj declared that they lacked the means to build their own school, and preferred to send their children to the German school. A Jewish school was finally opened in 1833 with instruction in Hebrew and German.

Between 1940 and 1944, the community of Lugoj remained under Romanian jurisdiction in the southern region of Transylvania. While property was confiscated, the Jews of Lugoj survived the Holocaust. In 1945, the community was reorganized under the leadership of rabbi Abraham Isac Nebel, and in 1947 the number of its members increased to 1,620 because of an influx of refugees from northern Bucovina. As a consequence of emigration, however, the Jewish community only had 220 members in 1971. In 2003 the community had about 30 members.