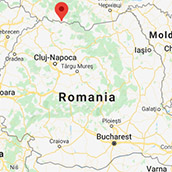 Town in Romania. Sziget (Hun., also Máramarossziget; in Jewish sources Sziget, Siget, or the older Sihot) was the capital of Máramaros county in the Kingdom of Hungary before northern Transylvania became part of Romania after World War I. The town was returned to Hungary briefly between 1940 and 1944. Surrounded by the Carpathian Mountains, it was located in a region least affected by modernization in the kingdom. In all of Hungary, the cultural and economic profile of the Jews of Máramaros county most resembled those of the eastern European shtetls.

The growth of the Jewish population in the eighteenth century was caused by a steady migration from Poland. Around 1759, when Tsevi Fisch came from Poland to serve as the county and Sziget’s first rabbi, the fledgling community could not have been home to more than 100 Jews. The Sabbatian heresy made inroads in this sparsely settled region. Several of Jakub Frank’s intimates came from Sziget and in the 1760s a significant number converted to Christianity.

When Fisch died in 1771, his post was left unfilled for 30 years until Yehudah Kahana (ca. 1740–1819), author of Kuntres ha-sefekot, was appointed in 1802. His stature as a rabbinic authority served to strengthen the community’s institutions. He was succeeded by an erstwhile rival, Menaḥem Stern (1759–1834), the scion of one of the first families in Máramaros, who, unlike his predecessor, was a follower of the Hasidic movement that increasingly was making its presence felt in the region. Legend had it that the Ba‘al Shem Tov had assigned “the handsome garden” of Máramaros to Koppel of Kolomea, whose descendants, the rebbes of Kosov and later of Vizhnits, came to view the county as their fiefdom.

When Stern died, part of the community wanted his son-in-law Yosef Stern to succeed him, but the Kahana clan—the numerous, wealthy, and influential descendants of Yehudah Kahana—prevailed, electing Eli‘ezer Nisan Teitelbaum (1786–1854), the son of the outstanding Hasidic personality in Hungary, Mosheh Teitelbaum of Újhely. The opposition of the Kosov Hasidim, who formed a large faction of the community, led Teitelbaum to renounce his office in 1840. In turn, when Yosef Stern (1803–1858) was elected with Kosov backing, he was plagued by the Kahanas, who held his qualifications in low regard. Their camp was bolstered by Yehudah Modern, a brilliant scholar from Pressburg, who had married into the Kahana family and had established the first yeshiva in Sziget. As the search for a new candidate began, the Kosov Hasidim were momentarily weakened when the followers of Ḥayim of Kosov split between his sons, Ya‘akov Shimshon, who would stay in Kosov, and Menaḥem Mendel of Vizhnits.

Into the momentary breach stepped Yekuti’el Yehudah Teitelbaum (1808–1883), the son of Eli‘ezer Nisan, who was elected with the enthusiastic backing of the Kahanas. The Yitav Lev, as he came to be called after his work, was a scholar of stature who founded the first Hasidic yeshiva in Hungary. Within a few decades, there were more than a dozen bate midrash and kloyzn catering to every trend within the community that numbered more than 2,300 Jews in 1869, along with numerous charitable societies. While most of the Jewish population was engaged in petty trade and crafts, after 1860 it became possible for Jews to own land and timber, and a considerable number worked in the lumber industry.

Yekuti’el Teitelbaum did not take a leading role in the culture wars of the 1860s, although he did align himself a posteriori with the ultra-Orthodox zealots. Much to the chagrin of the Orthodox, however, Sziget remained an unaligned Status Quo community during his lifetime. Yekuti’el was succeeded by his son Ḥananyah Yom Tov Lipa Teitelbaum (1836–1904), known as the Kedushat Yom Tov, whose decision in 1883 to join the Orthodox organization split the community in two. Over the following years, the Orthodox camp mobilized rabbinic support from Hungary, whereas their opponents who were led by the Kahana clan received backing from Galicia and even as far as Lithuania. Their opinions were reproduced in pamphlets (some were reprinted a century later during Belz–Satmar clashes) that constitute an important historical source of the era.

Sziget eventually split in 1887 into rival Orthodox and “Sephard” (that is, Hasidic) communities. The latter was joined by Sziget’s progressive elements and eventually became aligned with the Status Quo party. Shemu’el Binyamin Danzig (1878–1944), who served as rabbi, introduced many modern institutions in the community. Ḥananyah Yom Tov Lipa Teitelbaum, on the other hand, became one of the pillars of Hungarian Orthodoxy. When Aryeh Leib Lipschitz was elected president of the Orthodox bureau in 1898, Teitelbaum was named vice president as a counterweight to the rabbi of Abaujszántó, known for his anti-Hasidic views.

The dynastic principle of the Sziget rabbinate was firmly in place when 24-year-old Ḥayim Tsevi (1880–1926) succeeded his father and even more so when upon his sudden death he was followed by his 14-year-old son Yekuti’el Yehudah (1912–1944). Nevertheless, the Teitelbaum sphere of influence, even though the family was allied in marriage with the Galician Halberstams, remained circumscribed to the town proper until the rise of Yo’el (Yoelish; 1887–1979), Ḥayim Tsevi’s brother, who became the rabbi of Nagykároly (Carei) and Szatmár (Satu Mare) after World War I.

On the eve of World War I, close to 8,000 Jews lived in the city (constituting roughly 37% of its population). The city’s Hasidim had become more and more variegated. Besides followers of the Teitelbaums and the Vizhnitser rebbe, whose Hasidim continued to dominate most of Máramaros county, there were now followers of new Hasidic dynasties such as Spinka, founded by Yosef Me’ir Weiss, and Kretchnev (a Nadwórna offshoot), founded by Me’ir Rosenbaum. Later, Yosef Lichtenstein founded a court of his own. Strictly speaking, he was not a Hasid, but as was the case with his famous uncle Hillel Lichtenstein, his exemplary piety attracted a considerable following among craftsmen and laborers. He stunned Sziget when on the Shavu‘ot after the Balfour Declaration in 1917 he delivered an impassioned four-hour sermon on behalf of Zionism. He became the spiritual leader of religious Zionists in the town.

The Mizraḥi of Transylvania held its first national conference in Sziget in 1929 with Rabbi Danzig a member of its presidium. Besides the various Zionist youth movements founded after World War I, Tseirey Agudas Yisroel also flourished in the 1930s. Those aligned with Vizhnits supported the movement, but it even received the tacit approval of a young rabbi who introduced vocational training in the yeshiva in anticipation of immigration to Palestine.

Sziget was a center of Hebrew printing from the 1870s, and there were several short-lived attempts, in particular by the legendary humorist Hirsh Leib Gottlieb, to publish newspapers in Hebrew and Yiddish. Among the writers who worked in Sziget were the historian Yekuti’el Yehudah Greenwald and the Yiddish poet Yoysef Holder. Memoirs of Sziget on the eve of the Holocaust were later written by Elie Wiesel and David Weiss Halivni.

During the interwar period, the Jewish population of Sighet (now in Romania) leveled off at roughly 11,000. Most were killed in Auschwitz in 1944. In the years immediately after the war, the city once again briefly boasted about 2,000 Jews, but these were not born locally. In 2000, several dozen Jews lived in Sighet.

The YIVO Encyclopedia of
Jews in Eastern Europe
This is an ongoing project. Please check back for updates and additions to the catalogue.